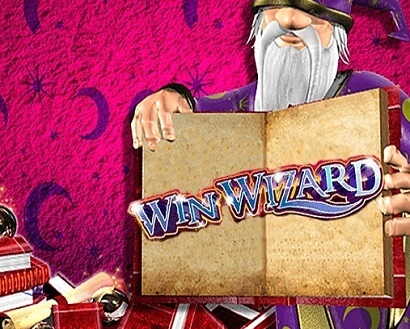 Win Wizard is a five reel, twenty pay line slots game developed by Novomatic. Novomatic has attempted something different with this slot casino game, and combined the fantasy world of witchcraft with the selection of fruit used in the classical old time fruit machine. All the symbols are fruit, like Plums and Cherries, except for the Wizard, the Frog, the Magic Crystal Ball and the traditional playing cards from ten to the ace, that represent the lower value symbols.

In Win Wizard, the green Frog symbol is the Wild, and as such can replace any other symbol that could be used to complete a winning combination, apart from the Scatter symbol. The Frog Wild will, however, only appear on reels three to five. The Scatter symbol in the game is the Wizard. The music soundtrack of Win Wizard is soft and pleasant, with small extra sounds when a Wild appears, or when you achieve a win.

The Magic Crystal Ball can Give Some Big Wins

The playing card king will award you with ten times your first wager if you find five symbols together at maximum bet level at slots online casino Australia. The Plums and Cherries are the symbols with the lowest value of all, and will pay only twice your first stake if you land five of each of them.

The Wizard in the game appears randomly after any spin, whether you win or lose. This is the Win Wizard feature that is the important feature in the game. Up to five Wizards can appear on the reels, each of them with a Book of Spells in front of them.

When you click on the Spin button, the Wizard will open his Book of spells, and you can turn the pages to reveal cash prizes.  As long as you find a cash prize you can continue turning the pages and continue picking cash rewards. This reward can vary between five times your initial wager and five hundred times. If the Book stops on a page which says The End, the wizard bonus game will end. If you have managed to find more than one Wizard on the screen, the bonus round ends when all the books say The End. The Wizards all disappear in a puff of smoke, and you will go back to the main game.

Win Wizard also offers a Gamble feature. After any spin you can activate this feature by clicking on the Gamble button. You have to try to guess the colour of the next random playing card, and a corre4ct guess will get your winnings doubled. You can continue the feature, and try to guess the suit of the card. A correct guess will quadruple your winnings. This gamble round is slightly different, however, in that there is a Lucky Loser feature. You may be rewarded with a mystery prize if you have lost in the Gamble round.

The bonus feature in Win Wizard can be exciting, and there is the potential for some big wins without requiring any difficult combinations.