Ooh Aah Dracula slot is a comic online slot from Barcrest Software. The game has five reels and ten fixed paylines that cannot be altered. Although the lines are fixed, the game offers a large wagering margin, which makes it accessible to players of all budgets.

All ten lines can be played for 0.10. A high roller button is available on the game which offers players a set of two options. The first option is five spins for 20 currency units; the second is 5 spins for 30 currency units. Each of these offers comes with a unique bonus round that happens after the five spins. The first option has a graveyard bonus, while the second options bonus is called a Super Graveyard Bonus. Players of smaller budgets can wager anything up to 500 per spin.

Ooh Aah Dracula slot has lots of bright colours interspersed amongst the black that takes up a lot of the slot. This entire online real money slot Philippines is in high definition and looks good on a big screen. The black backed reels are set inside a castle made of yellow brick.  The reels take up most of the screen, with only a little bit of a starry night sky able to be seen behind them.

The buttons at the bottom of the screen are all theme based and fit in nicely. Ooh Aah Dracula slot is a cartoon style slot, with all of its characters drawn in stylized fashion. The theme is a bit dark, being about vampires, but Ooh Aah Dracula slot offers a light hearted take on the subject. 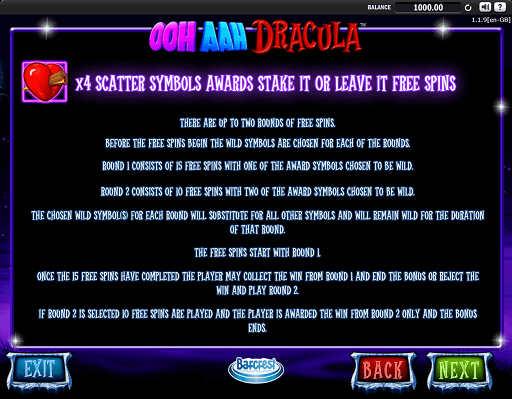 Not all of the symbols in Ooh Aah Dracula slot are theme based, but even the playing card icons have been designed to fit in with the overall feel. Each letter or number, ten through to Ace, has had an added detail drawn into them, for example the ten has a hanging bat like vampire and the Ace has a flying bat as a part of the letter. The theme based symbols include Dracula himself, a female vampire with very large boobs, a castle, a rabid bunny, a werewolf and the Ooh Aah Dracula slot logo. Dracula is the games highest paying symbol, offering the standing jackpot of 5000 times your bet amount for five of him in a row.

The wild symbol is the word Wild. This can substitute for all other symbols except for the scatter.

The graveyard bonus and super graveyard bonus that is available to the high rollers is basically a Pick Me game. You simply click on a bunch of headstones, each of which hides a prize.