Ned and the Rats Slot Review & Guide for Players Online

Online casino players might swear that the Ned and the Rats slot game has to be a spin-off of an animated film, especially considering that the impressive 3D artwork pays as much attention to the background as it does to the reels.

However, developer BetSoft seems to have created its own unique, original story within a video slot game format, albeit one that might take some inspiration from cult-inspiring films like Joe’s Apartment and Ratatouille.

The Ned and the Rats slot presents bachelor Ned in his cluttered apartment. Beside his armchair is a huge TV cabinet, housing the 5X3 reel grid as a bank of TV screens. Joe lives with five rats: scrounger Franklin, adventurous Denny, Sweet Pea the adorable cutie, clever Charles and greedy Mack. They are highly civilised, for rats, entertaining us with doo-wop singing in five-part harmony and really letting rip in bonus rounds.

Game Play Works in a Storyline

Apart from Ned flicking through his TV channels while the rats serenade him from atop the cabinet, Ned and the Rats slot’s game play revolves around a first visit from Ned’s Girlfriend, and her shocked reaction to his ratty friends. 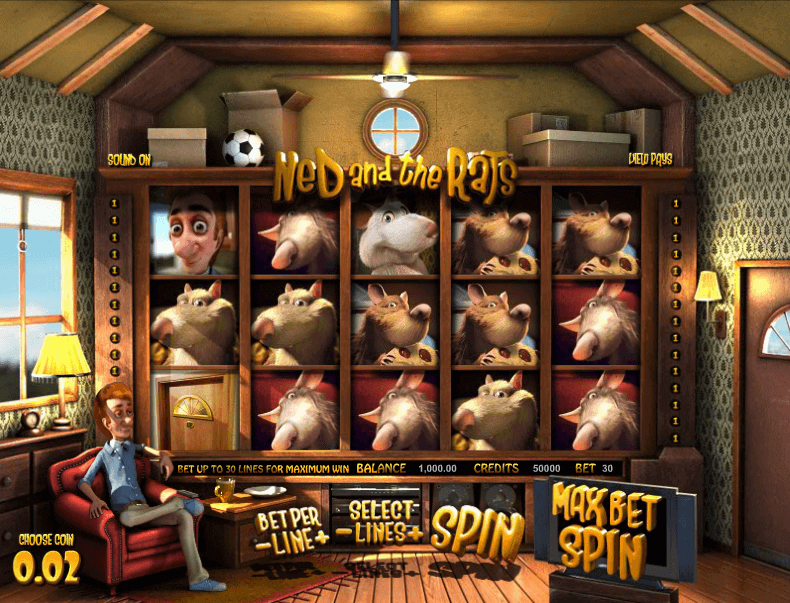 There are only seven ordinary payline symbols, which make up for the game’s lack of a Wild somewhat, by being more likely than titles using ten or more icons to create matching symbol runs left-to-right from Reel 1 on the same payline.

All symbols can also stack, making for more winning combos. The apartment door, Franklin and Denny are the three icons with the lowest values, and all require three matches or better to win. But with prizes ranging from 50 coins for three doors to 750 coins for five Dennys, they can still be rewarding.

Two or more matches win prizes for the other four Ned and the Rats slot payline icons: Mack, Charles, Sweet Pea and Ned. For five of a kind, these symbols deliver respective prizes of 1,000, 1,250, 1,500 or 2,500 coins. Like all the other symbols, they indulge in quick, amusing animations whenever they feature in a win.

The Ned and the Rats game features three bonus Scatter icons, the first of which is the Rat Tail Scatter: a picture of a rat disappearing into the hole in a skirting board. When three appear in any position, the Rat Tail Pick Me has the player choose one of the bonus icons, revealing an instant coin prize.

The Singing Rats icon is Ned and the Rats slot’s second Scatter, featuring all the rats in one frame. Three of these will trigger a round of 5 Singing Rats Free Spins, during which the rats sing the player through their wins and losses.

Ned’s Girlfriend is the last Scatter. Three or more Girlfriends trigger Ned and the Rats slot’s Ratty Rap Doo-Wop round: the Girlfriend screams and faints, and the player must pick a rat to sing her a lullaby. The longer she stays asleep, the bigger the bonus that can be won.