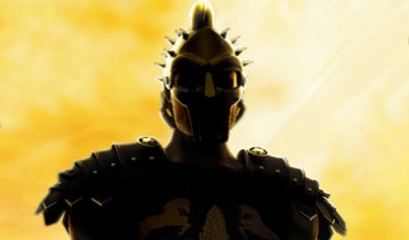 Gladiator is a popular slot powered by Playtech software. Based on the epic film about a Roman general turned slave, the game includes images of all the main characters in the film. Fans of the movie will be pleased to know that the game also includes video sequences and sound clips when a winning combination is achieved on the reels. Set against the backdrop of the coliseum, the graphics, animation and sound effects are all top class. Enhanced with battle-style background music, the game will appeal to movie fans and anyone looking for a big win slot with bonus features.

The slot machine in Gladiator is based on the classic Playtech setup of 5 spinning reels with a total of 25 paylines. The game includes a host of bonus features in the form of a Wild symbol, Scatter symbols, a pick-bonus and a jackpot bonus round. On the reels, players will find images of all the main characters from the movie except Russell Crowe himself. The highest paying is Commodus followed by Lucilla, Marcus Aurelius, Proximo and Juba. For the lower paying symbols, Playtech have used the standard high card symbols from 10 to Ace.

The Wild symbol in Gladiator is the helmet symbol. As a Wild symbol, the helmet is able to substitute for any of the standard game symbols in order to form a winning combination on any of the 25 paylines. The Wild symbol only appears on reels 2, 3 and 4. The only symbol the Wild cannot substitute for is the coliseum Scatter symbol. Including bonus symbols, highest paying symbol of the game is actually Commodus (Joaquin Phoenix). Finding all five Commodus symbols across the reels will pay out 5000 coins on a single coin bet.

The Gladiator Jackpot Bonus Round

The Wild Gladiator helmet symbol is also the key to activating the Gladiator Jackpot Bonus round. To trigger the round, players must land 3 Wild symbols anywhere on reels 2, 3 and 4. Once the bonus round has been triggered, players will be taken to a second screen where the game itself will pick nine random helmets that award a coin payout. There are three different types of helmets, namely bronze, silver and Gold. If all nine gold helmets appear on screen, this will trigger the progressive slot jackpot payout.

The Coliseum Bonus Round

The Scatter symbol in Gladiator is the coliseum symbol. The scatter itself pays out in any position on the reels and acts as a bet multiplier like scatters in various online slots India games. If players manage to land all five Scatters across the reels, this will result in a bet multiplier payout of 100x the total bet stake. The Scatter symbol is also the key to activating the Coliseum bonus. To trigger the bonus, players must land 3 or more Scatter symbol anywhere on the reels. Once triggered, players will be taken to a second screen displaying a 4×4 grid of stones. Starting from the bottom row, players must pick stones to reveal coin payouts. All the payouts in the round are added together and combined with the slot winnings.