Girls with Guns – Frozen Dawn is an action packed online video slot game powered by Microgaming. This is the second game of the series, the first being Jungle Heat. In this second instalment, the crime fighting girls are back and have infiltrated Saskia’s Siberian military base high up in the snowy mountains. Set against a snowy animated backdrop, the game features images of all six gun toting femme fatales in cold weather gear. Complete with high quality graphics, animation and sound effects, this slot is a worthy sequel and will appeal to most slot enthusiasts.

The slot machine in Girls with Guns – Frozen Dawn is back with the popular 5 reel, 243 ways to win setup. The game itself also includes a number of bonus features in the form of magnetic Wilds, frozen Wilds, free spins and a bonus game. On the reels, the highest paying symbols are the girls themselves. The leader Katherine pays out the most followed by artillery expert Maria, then sniper Kira and demolitions expert Alex. Taking the bottom spots are Zoe, in charge of tactical and Jess the infiltrator. The evil Saski and her ninja minions take on the role of the lower paying symbols along with card symbols 10 to Ace.

The Wild symbol in Girls with Guns – Frozen Dawn is the game logo itself, for example, many slots have logos as their wilds at real money casinos in New Zealand. The Wild symbol can be used as a substitute symbol for all other symbols except the satellite Scatter symbol. The game also includes a special Wild which is the silhouette image of all the girls and their guns. The special Wild appears on reel and expands to fill the entire reel in the base game.

One additional bonus game in Girls with Guns – Frozen Dawn is the shootout bonus. This is randomly triggered at the end any non-winning spin. At any given time after a non-profitable spin, one of the girls can appear on screen and shoot out the high card symbols which will be replaced with new symbols and a chance to create a new winning combination for you to bet big. 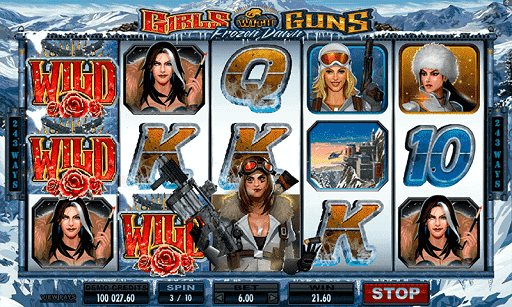 Here, frozen Wild symbols can appear on the reels and will be held in place for up to three spins before melting away. The second bonus feature is the magnetic Wild feature. Magnetic Wilds appear on the 5th reel and are immediately pulled to the leftmost reel where they stay for the duration of the free spins round. When more magnetic Wilds appear, they will be pulled across and can form a completed set of stacked Wilds.