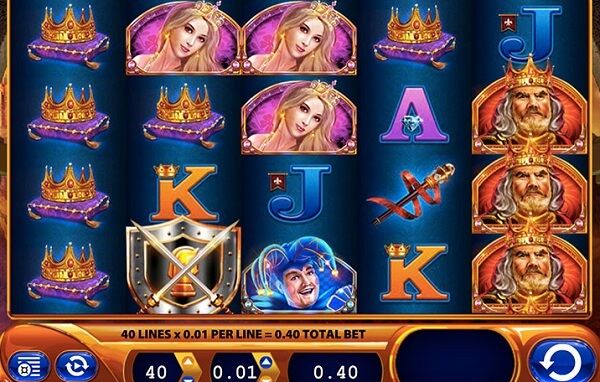 Black Knight 2 is a five reel, four row and forty payline casino slot title developed by Williams Interactive games. Themed around an era where kings ruled with an iron fist and the noble knights who were under the king’s command and upheld order in the land.

Black Knight 2 offers players winning features including stacked symbols, a wild symbol that substitutes for all other symbols including the bonus symbol and a free spins feature that allows for potential big winning combinations with locked and expanded reel action.

The reel symbols in Black Knight 2 are all themed around the king’s court and the royal elegance of noble times past. These symbols include but are not limited to the king’s sceptre, a royal ring, a golden crown encrusted with ruby red jewels, resting on a purple cushion, a jester, the princess, the king, a noble knight fully kitted in armour, riding in on horseback and  a battle ready shield with two crossed swords in the forefront.

Players will be delighted to know that Black Knight 2 is fully customizable. Players are able to adjust the payline wager amount as well as the active paylines available, thus allowing for complete control over wagered amounts.

The Noble Knight, fully kitted in armour, riding in on horseback represents the wild symbol in Black Knight 2 slot.

Players should be aware that the knight wild symbol only appears on reels two, three and four acting as any wild symbol within a video slot, substituting for all other symbols in the game, including the feature bonus symbol. This allows for potential big winning combinations to be made on the reels.

All higher value symbols in Black Knight 2 slot have the ability to become stacked on the reels. This is a nifty feature that allows for additional winning combinations to be made.

The shield graphic, complete with two crossed swords in the forefront, represents the bonus symbol in Black Knight 2 slot. Players should keep a keen eye out for both the bonus and wild symbols on the reels, as these will trigger the free spins feature of the slot.

If players manage to land three or more shield bonus symbols or substituting wild symbols on the reels, the free spins feature of the slot will be triggered.

This is a standard free spins feature; players at casino online UK will receive seven free spins with no additional multipliers.

Players will be delighted to know that landing the Black Knight wild symbol on reels two, three or four will turn the reel into an expanded reel covered with wild symbols. The specific reels the symbol features on will become locked into place for the duration of the free games round, allowing for potential big winning combinations during this feature of the slot.